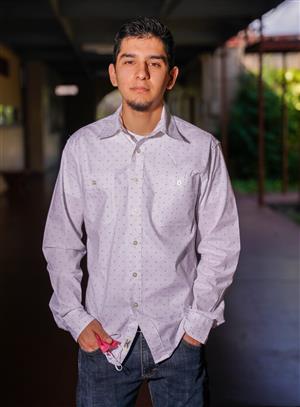 Henry Palmon, a graduate of Donna North High School’s Class of 2019, never imagined he would be working for SpaceX and helping send rockets into space. Palmon is a specialized welder at the aerospace company’s South Texas launch site, a private rocket production facility, test site and spaceport constructed by SpaceX located at Boca Chica east of Brownsville. Palmon tells us that he is part of a production team that’s exclusively building the next-generation launch vehicle, Starship.

While Palmon has been on the job for a little over a year, he is still in awe about being part of a group of individuals that is developing the actual structure of the rocket itself. “Sometimes it’s hard to believe that I’m here,” Palmon said. “You don’t really think about it because we’re working day in and day out, but when you start to think about it, we’re really building rockets here in Brownsville. It’s really exciting. We’re walking by these crazy structures and all these rocket engines being assembled and installed at the production site. We literally are making everything.”

Starship will be a fully reusable transport system capable of carrying up to 100 people to Mars. “It is very rewarding,” Palmon said. “We’re doing the best we can and since the rocket is still a prototype, it’s always about research and development with these sort of things. We’re still figuring things out, and still seeing what works and what doesn’t work.”

Palmon became interested in the welding profession as a teenager helping at his father’s machine shop in Donna. “I started at my dad’s shop when I was about 13 or 14,” Palmon said. “I liked it, I liked the trade so when I was in school, I decided to take welding classes to see if I could learn anything else. I’m definitely better for it now. These classes refined my skills and trade itself because all we did was weld and take exams to be able to have the skills employers are looking for.”

Palmon is grateful to both his dad and his Donna ISD instructor for pushing him hard. He ultimately received his Structural Welding and Machining certificates at Donna ISD and later a Combination Welding Certificate and Associate in Applied Science in Welding at South Texas College. “In the moment, I remember saying ‘you guys are hard on me,’ but now looking back at it, I really appreciated it because I’m better for it,” Palmon said. “When people are hard on you it makes you want to try harder.”